SmartEyeGlass from Sony is available for pre-order, despite problems with Google Glass

The Fact that Google Glass can not be called a successful project, for anybody not a secret. However, Sony also decided to play on this field, and the cloak with her project ripped: presented SmartEyeglass Developer Edition SED-E1. Glasses now available for pre-order and will appear in 10 countries after the official launch on March 10. They will cost £520 tax free in the UK and $840 in the US. 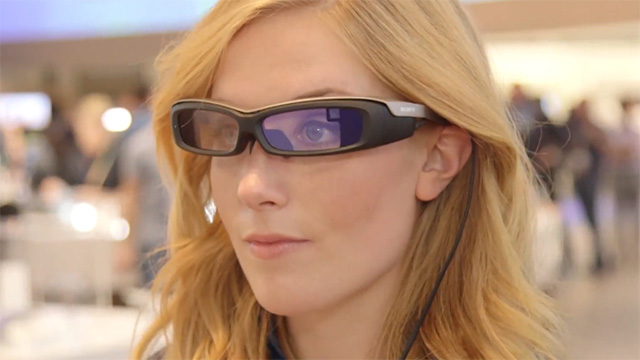 As from Google glasses, SmartEyeglass uses the principle of augmented reality by overlaying information on the image into your field of vision. However, instead of a color scheme here, the information will be displayed bright green color in solution 419x138 pixels.

Of Google glasses and Sony different working principle. Used in the first projector, the second image displayed on the projection layer full clear lens covering your field of vision.

3 mm, lens transparent 85%, so you can read the information, but the world around you is visible quite clearly.

Sony say that monochrome scheme to extend the life of the battery, but a lead time of about 150 min without using the camera, and with camera – 80 min. Although, it is possible that such featureless figures related to the fact that this is the version for developers, and the final sample will receive a more capacious battery.

As might be expected, the glasses embedded sensors such as gyroscope, accelerometer, light sensor and electronic compass. It has 3 MP CMOS sensor that allows you to take 3 MP pictures and shoot QVGA video 15 fps.

The kit includes a wired touch controller which has a battery, a speaker, a microphone, and an NFC chip.

Glasses from Sony look better than the ones that Google offers, but graceful would not call them too. However, again it is worth remembering that this is the version for developers, and maybe the final product will be a little more aesthetically pleasing. Can be.

What do you think about the glasses from Sony? Whether such a product, as perceived by the notorious Google Glass? And what you lack to represent similar points on yourself at least theoretically?