LG has finally announced the technical characteristics of new line of tablets G Pad. As expected, the device is largely similar. Recall that about a month ago, the South Korean manufacturer anonsirovana 3 new tablet with a screen diagonal of 7.0, 8.0 and 10.1-inch. 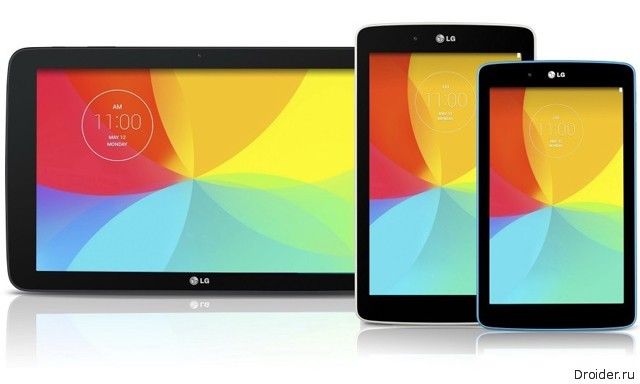 Externally, except for dimensions, the tablet PCs G Pad not differ. It is necessary to highlight the smaller G Pad 7.0, as the model is presented in several color options. In addition to the standard black and white, blue and additionally accessible lemon-orange options.

Regarding performance, all the tablets series run on the same Quad core processor with a clock frequency of 1.2 GHz and has 1 GB of RAM. G Pad 7.0 internal memory is 8 GB and its big brothers at 16 GB. By the way, the screen resolution of the new G Pad is the same – 1280x720 pixels. The new autonomy of the devices responsible battery capacity of 4000, 4200 and 8000 mAh (depending on model). All models operate on Android 4.4 KitKat.

Sales of one of the three new G Pad tablets will start in Europe before the end of this week. The first model will come with a 7-inch diagonal screen, G Pad 8.0 and G Pad 10.1 will appear later, "over the next few weeks." There is no information about in which countries the release will happen "tablets", and whether to Russia.