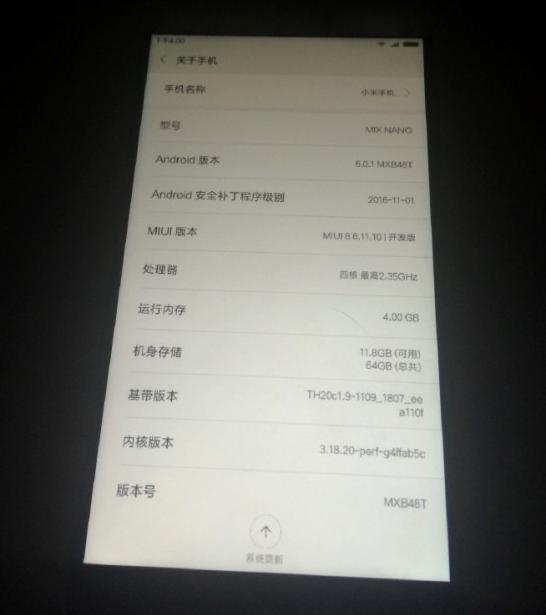 Smartphone Xiaomi Mi Mix caused a wave of delight, and also spawned a bunch of imitators amongst the vendors who are already preparing similar frameless models. At least the news about Huawei and Meizu. By the way, earlier a similar gadget showed a Sharp Aquos if you remember, but the baton was picked up only after the announcement of Xiaomi. Now the company is preparing a similar device, but a little more compact - Mi Mix Nano.

If Mi Mix delighted fans of the big diagonals of the figure 6,4, Mi Mix Nano will give only 5.5-inch that I actually would in the best case, called "mini" and not "nano". 1080p will be saved. But here is the area of the screen will be as much as 90%.

The device Works under the control of the processor 821 Qualcomm Snapdragon, Android Marshmallow 6.0.1, in addition, 4 gigabytes of RAM and 64 GB of internal.

The Price for the device is planned in the region of 3,000 yuan per configuration or announced 3,500 yuan for a model with 128 gigabytes of internal memory.

No word on whether this smartphone more resistant to drops, but most likely, nothing in the design has not fundamentally changed and it is understood that the device is quite fragile and requires careful treatment.