I normally super Gud: results of the autumn Apple presentation

On 7 September Apple held a traditional autumn presentation where you showed the world the iPhone 7 Watch Series 2 AirPods and a bunch of stuff. 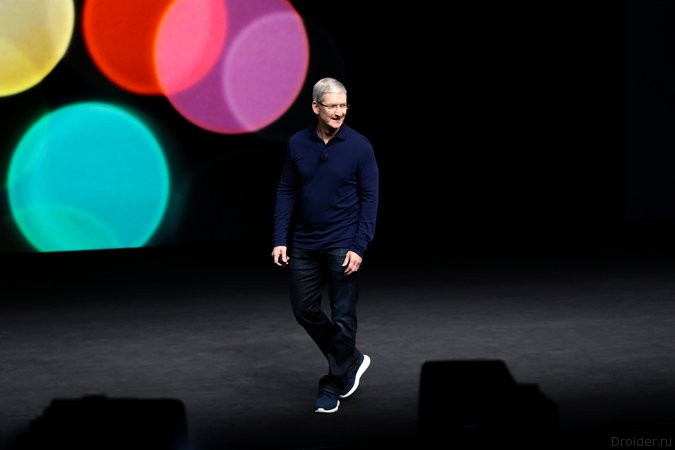 On the main announcements of the "Apple" of the Corporation in the world you can read comprehensive overview from the editors Droider.

Before the start of the presentation was known almost all about the new iPhone. New colors, improved camera, dual camera in the Plus version, the lack of a 3.5 mm connector and finally renders. Ardent fans of Apple smartphones could easily replace Tim cook on stage to tell about the novelty worse. When Steve Jobs was not like this, but the current CEO does not even shy shutit this.

As expected, the 7th generation of Apple's smartphone models — the iPhone 7 and iPhone 7 Plus. Although the sequence number was obliged to make changes to the design of the device, compared with the "six", the appearance has remained virtually unchanged. Among the obvious differences — the absence of white bands antennas on the body and a fresh color — matte and glossy black. Latest inspirational styled "black onyx".

Apple once again broke away from the Samsung design pic.twitter.com/v942T4KDUL

Confirmed the main concerns of many music fans the iPhone 7 lost 3.5 mm "Jack". Refusal contact made up for the additional speaker on the top bar, like a iPad Pro. As for headphones, it is now included with the smartphone will go new — connection via Lightning.

Not to shock the market by Apple for free (which is not the cupertinos) put into every box with a smartphone adapter for 3.5 mm plug. The construction was not the same flimsy like Lightning itself.

Tim cook paid the lion's share of the presentation of the camera in the iPhone 7. Despite the fact that module a measly 12 megapixels, by the standards of the current flagships of 2016, are hidden inside the surprise. The producers stuffed a camera system with optical image stabilization and 6-Elementum lens through which the camera makes some of the best on the market. In the Plus-version is built from 2 cameras, which have gained the power of 10x and digital 2x optical zoom.

The New iPhone 7 can run just as well as your friend is the bully from Bibirevo pic.twitter.com/69fb4qBScl

Both phones have received more than a bright light the technology of separating the background from the foreground and 7-megapixel front camera for selfie lovers.

Apple has traditionally pumped smartphones in terms of power. Devices based on the new 4-core a10 Fusion chip, which, according to developers, almost 2 times faster "six". The only difference with the Plus version from the "base" — 3 GB RAM instead of 2 GB. Improved and autonomy. The new iPhone is the most tenacious smartphone kupertinovtsy (30% more energy efficient than the previous version).

Changed and the minimum amount of built-in storage. Goodbye, 16 GB. Hi, 32, 128 and 256 GB. Again, as the iPad Pro. Even smartphones are equipped with protection from moisture and dust according to IP67 standard. It is possible to briefly immerse in water to a depth of 1 meter.

Wake me up in a hundred years and ask what is being done in Russia. I answer: drink and watch the presentation of the gadgets that have no money.

Getting Rid of the traditional "Jack", Apple immediately introduced wireless headphones. AirPods equipped with a processor and support for Siri W1. Without recharging accessory will work for 5 hours after which the headphones will need to be placed in cover-charge. Thus, it is possible to extend the work of the gadget for 24 hours. All anything, if not for the price of 12 990 rubles.

Phil Schiller explained the disappearance of the connector of the old format to the desire to improve other characteristics of smartphones, including display brightness (25% brighter "six") and the thickness of the body.

So Apple has rejected a 3.5 mm "jacks" who served mankind faithfully for almost 50 years. Unlikely this "dinosaur" will cease to exist in the next 10-20 years, but the company from Cupertino is tired of wires.

Someday, archeologists will find this and wonder... pic.twitter.com/FxMWraV2GA

Doubt what industry will react to the lightning opened a huge market for wireless and Lightning-headphones (900 million devices use this connector). Most likely, before the New year the shops will start to break from these gadgets. Beats wireless Solo3 and BeatsX has joined the game.

For half a year, Apple completely revised attitude to Watch. "Apple" smart watches, positioned as an expensive toy on the cover of Vogue, September 7, ceased so to be. Now is focused on active people for whom a morning jog or going to the gym is a lifestyle.

A New line of Watch lost precious materials and premium. Now the most expensive watch case is made of ceramics, which, according to engineers, more durable version made of stainless steel. The most interesting in Series 2 — "filling". First, the watches were waterproof. You can safely swim (the device can withstand a depth of 50 meters). Speaker independently spits out the water trapped inside. Absolutely alien technology!

Another innovation was the GPS module, which is responsible for accurate navigation and fitness tracking. Now to workout without close interaction with the phone.

The Second generation of the Watch has become faster thanks to the new 2-core processor. The developers say that the chip is 50% faster than the previous one. But of the autonomy chose to remain silent.

The Starting price Watch Series 2 in Russia will amount to 33 990 rubles. First generation "Apple" hours can be bought for 24 990 rubles. For Watch Edition in ceramic case will have to pay 116 000. All models will appear on September 23.

Apple has finally announced the release date of iOS 10. The new version of mobile OS will be released on September 13. IPhone 7 and iPhone 7 Plus will get an upgrade immediately. Of the videoasia Droider can I learn more about what to expect.

A large-Scale platform upgrade watchOS for "smart" hours will include: the control center (similar to a smartphone) and "alarm" SOS button. In addition, all the fitness apps will be able to function in the background.

Interestingly, the history of the service began with Farrell Williams, who attended the presentation. In June 2015, the Freedom song was exclusively released in the Apple Music on the day of the launch of the service. During this time, the application acquired 17 million subscribers, so it's time to upgrade. With the arrival of iOS 10 will the new interface and feature track of the lyrics. 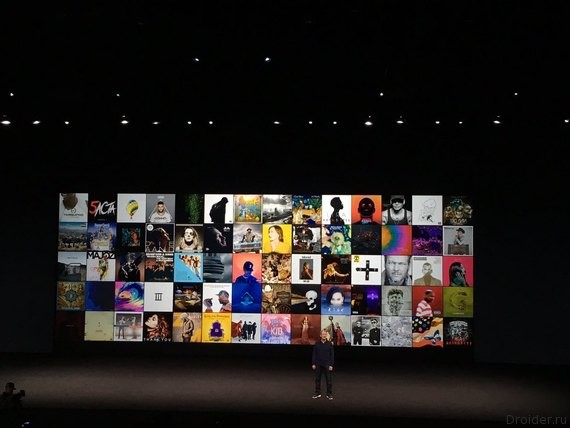 The Company announced the application for Home control "smart" household devices. In the phone, appears the transcription of voice mail and notifications about possible spam calls.

By the end of the presentation it became known that payment service Apple Pay comes autumn in Russia.

A Separate part of the presentation, Apple has paid mobile games. In particular, talked about the partnership with Nintendo and the game Super Mario Run, which will be released in December. Thus, the Japanese company beyond their native platforms. 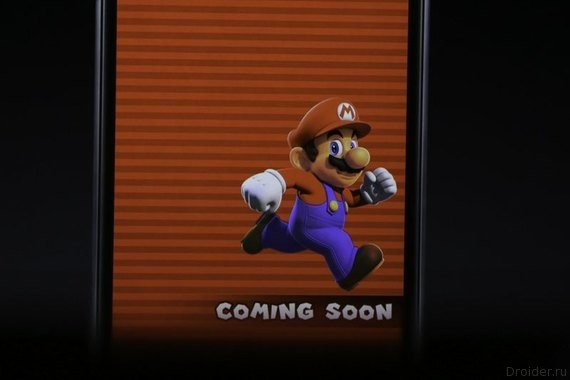 According to Tim cook, total app downloads exceeded 140 billion. Revenue also increased. The exact figure the CEO of Apple not named, but threw a dig at competitors with the words "more than 2 times than the nearest competitor." Obviously, it was on Play Store.

Apple has joined the hysteria around the Pokémon Go with a noticeable delay. Mobile game come and Watch. The smart watch will consider the steps of the user and automatically translate them into application on the iPhone. Early to "sit" on eggs with pokemon, it was necessary to go with the included application that quickly discharged smartphone. Release is expected before the end of 2016.

If for some reason the text related to the Russian language is not for you, then Apple specially released video, where the most important information collected in 107 seconds.

James Corden, Pharrell Williams, Sia and transmitting the Carpool Karaoke is, of course, great. Apple have learned to do a show of presentations. But all this did not distract consumers from penetrating the main: the company again showed a product with the "wow effect". But the illusion worked, so unpleasant residue from events left.

Even when to offer have absolutely nothing, Apple squeezes out myself juggling connectors, space protection from water, the amount of internal memory and typical "rethinking" of its own products. The impression that the Corporation has carefully delved into the discography of Sergei Shnurov and struggling echoed: "I normally super Gud". After this, the vendors and PR people Android get sad, because they have such tricks will never work.

The Conference is over, the grateful audience take the stage. pic.twitter.com/dBHULeCNLz