[WWDC 2016] All that remains of the Apple presentation 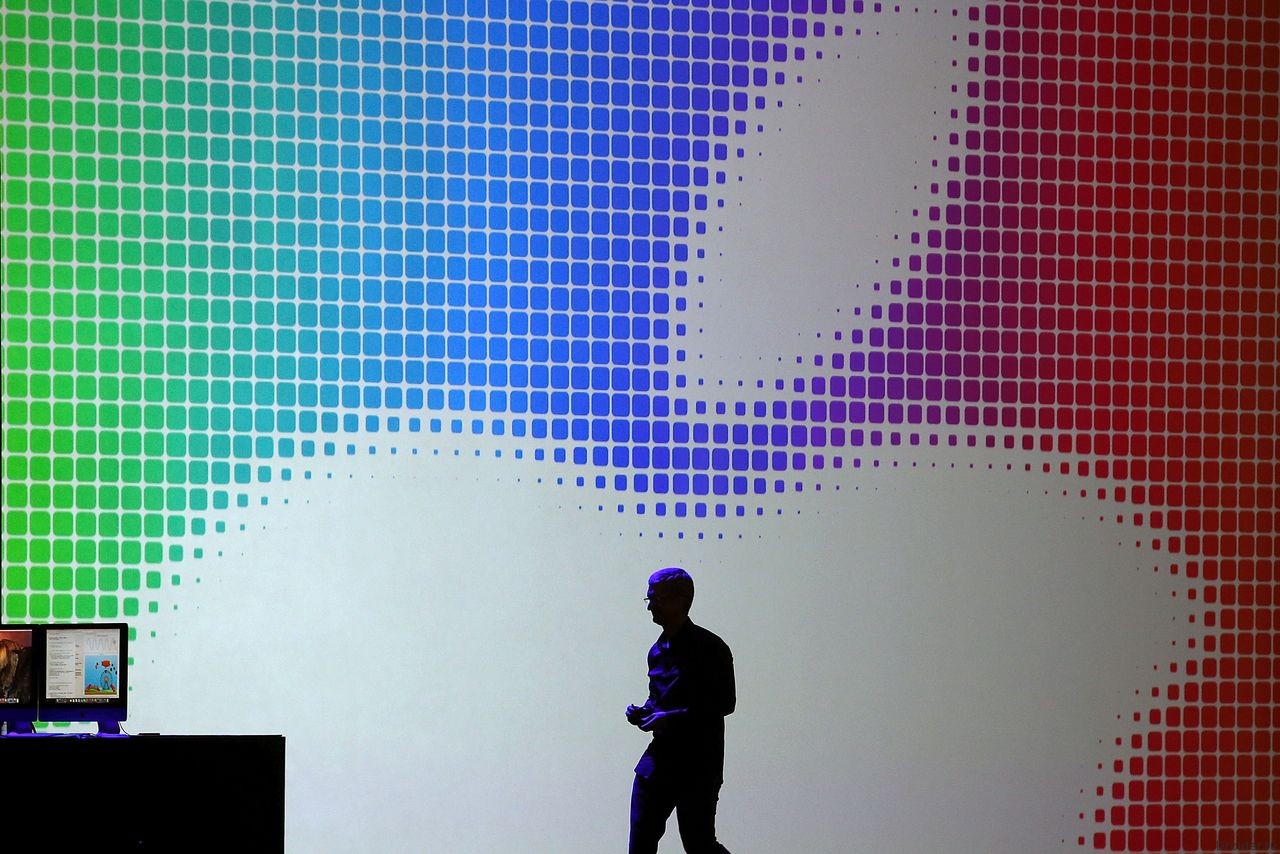 Revision Droider followed closely the "Apple" of the presentation to talk about what Tim cook and Co demonstrated the curious.

A highlight of the program was iOS 10. According to representatives of Apple, this is the biggest update of Apple's mobile OS for all time of existence. 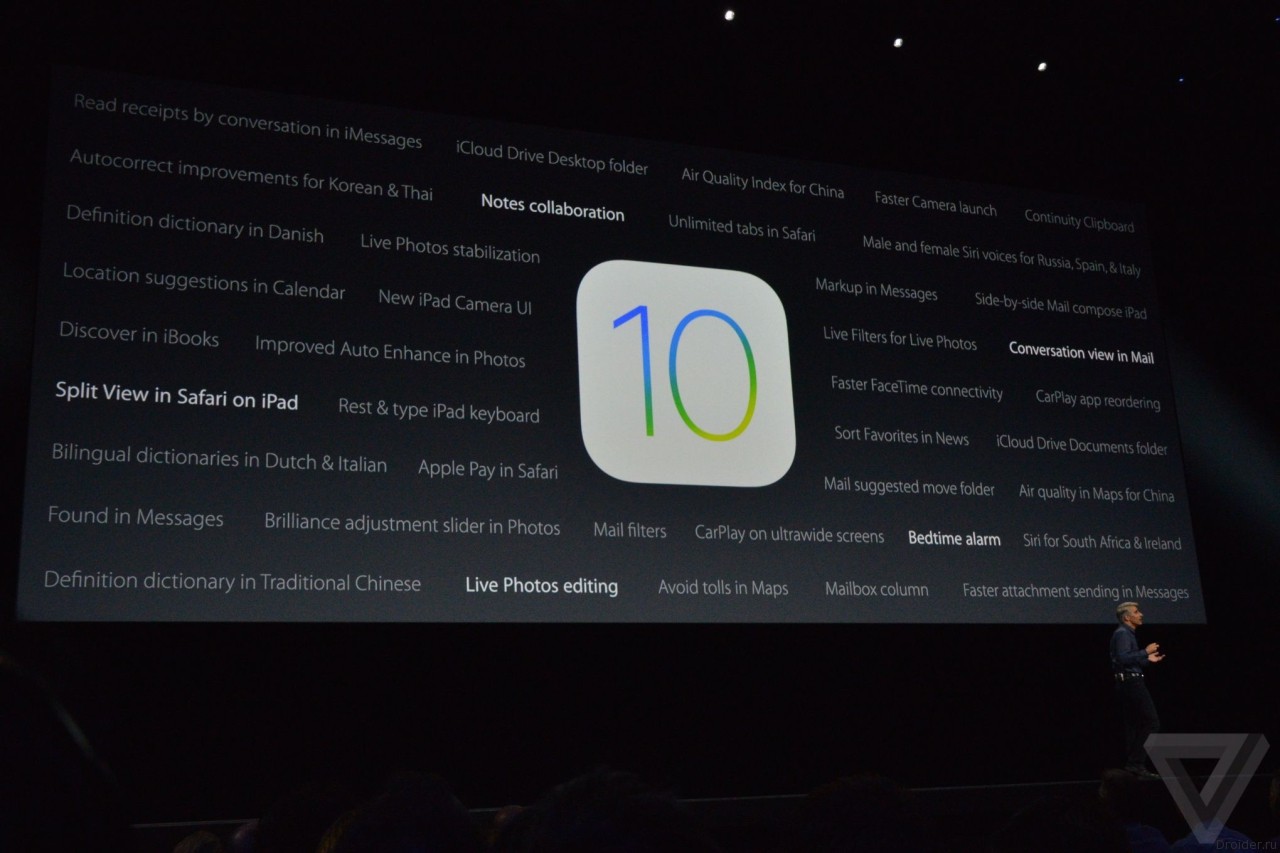 The Key innovations that the company put in 10 paragraphs:

1. The lock screen began to light up automatically when lifting the device, and 3D Touch learned to work on the lock screen (e.g., notification); 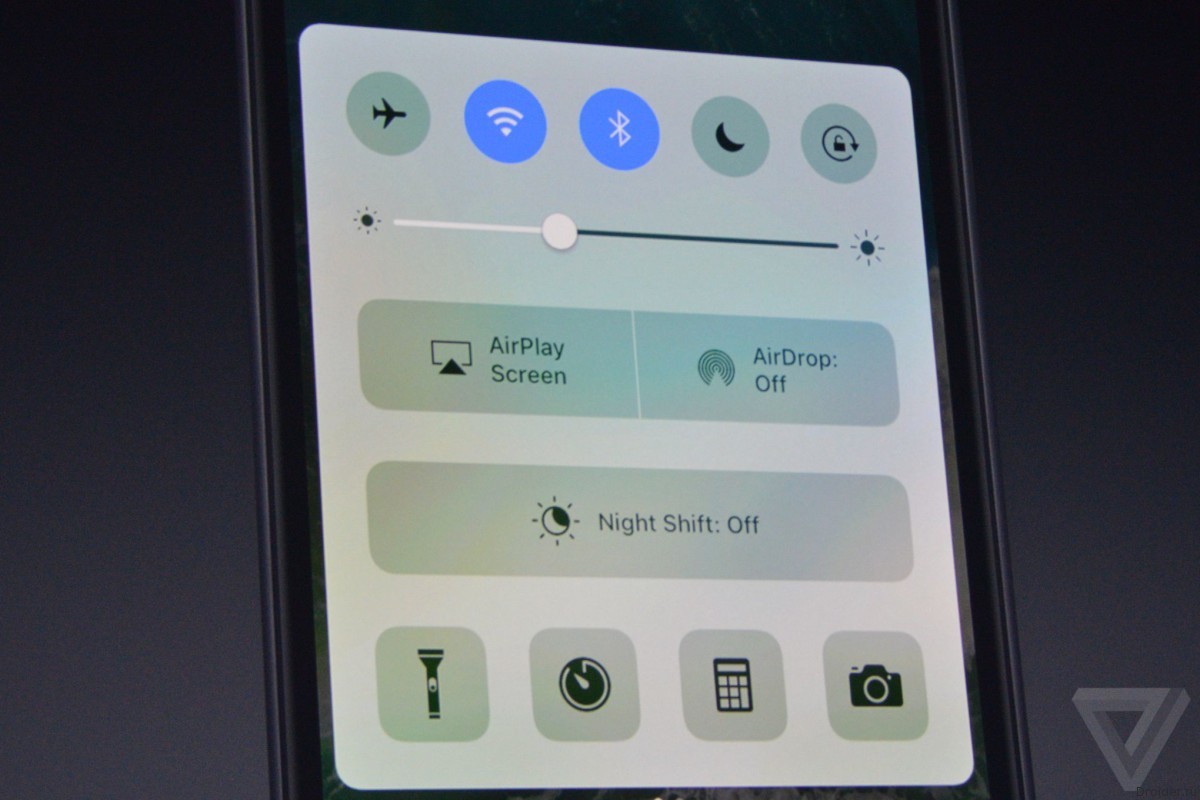 2. The completely redesigned command center. Now there are 2 tabs and a new interface. Now notifications can be removed using 1 Tapa (previously, it required 7 strokes);

3. Widgets in notification center, learned to play the video;

4. Siri can now be added to third-party applications (developers were given access to the API). 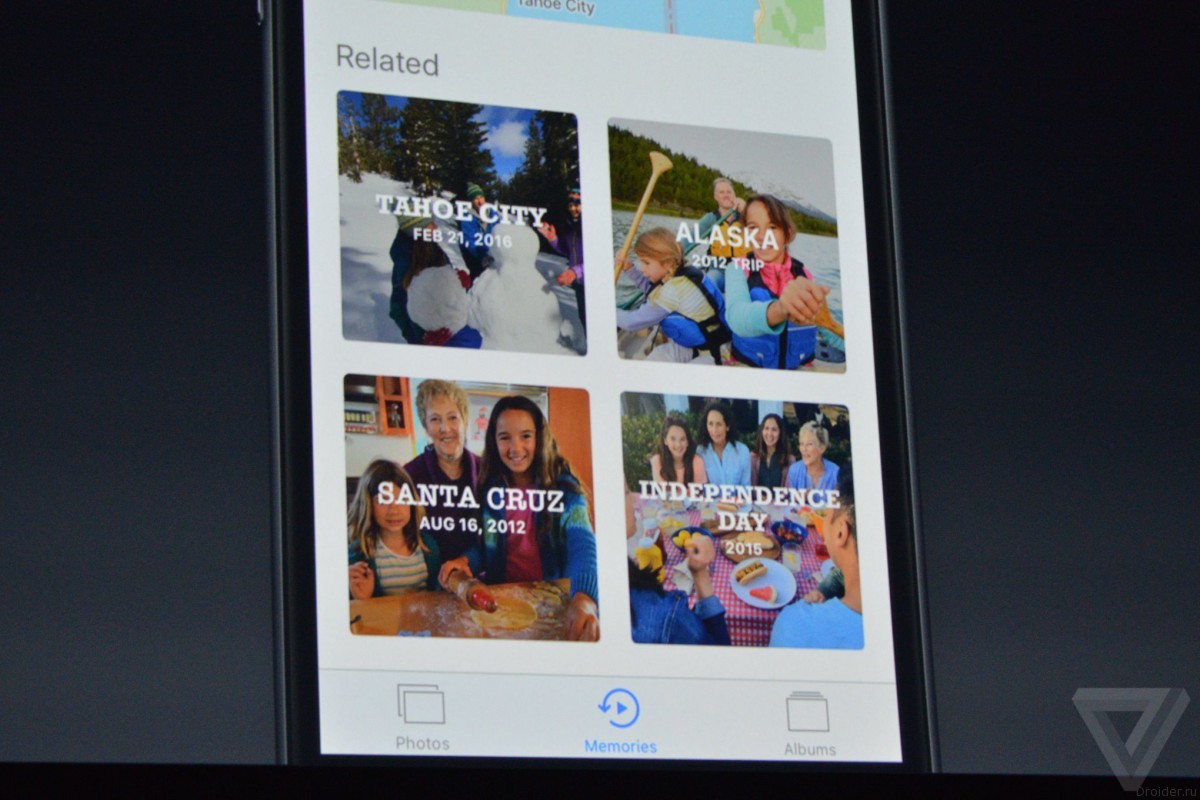 5. Big changes in Photos: added tab “Memory” (there will be group pictures taken in one place), you can search images by keyword and to collect from them (with the addition of video and “live photo”) cute clips;

6. Revolution in Apple Music: a new design, a daily updated playlist with consideration of the musical preferences of the user, there lyrics, abolished the section “connected” (Connect); 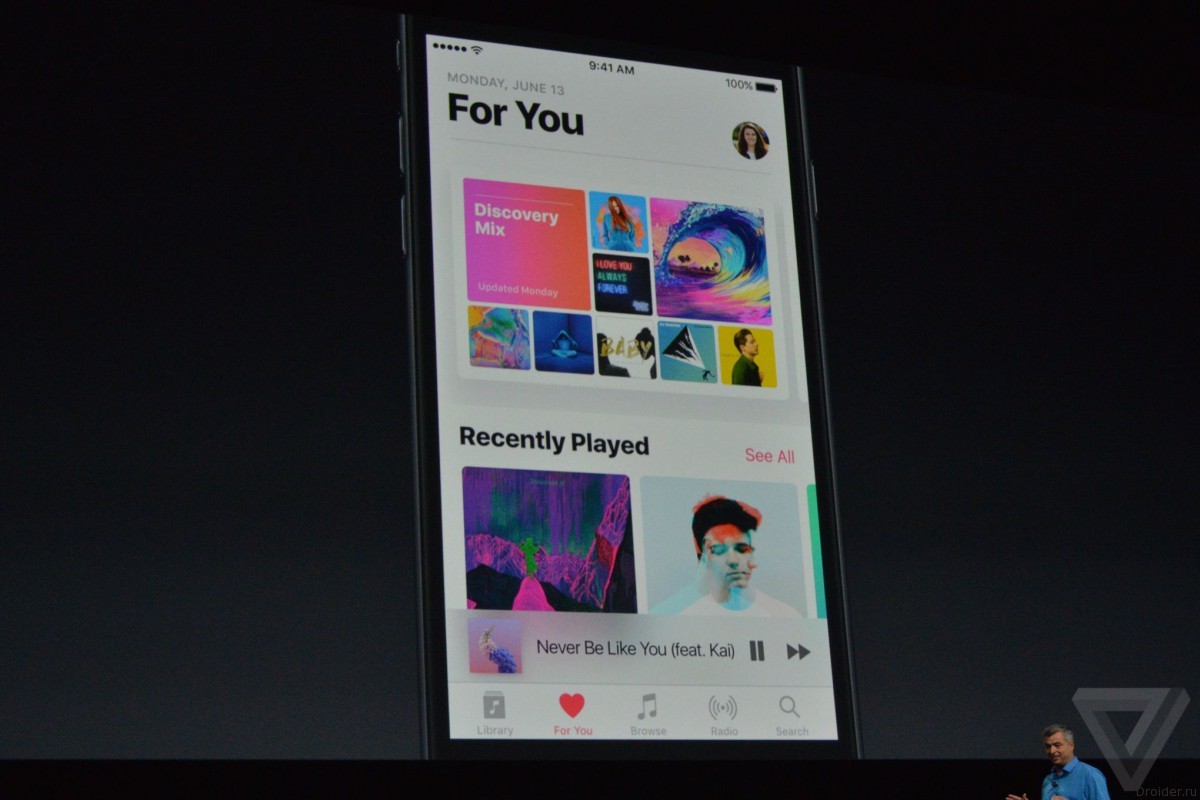 7. All calls (including those of the messengers) will be displayed in the standard dialer;

8. Changed app News (not yet available in Russia): new design, the ability to subscribe to specific publications (the number exceeded 2 000). The app now sends push notifications for urgent messages no advertising;

9. Maps also evolved better navigation, there was sync with CarPlay, the application was to provide options for visits to various places (like in Foursquare). And Maps are open for third-party developers; 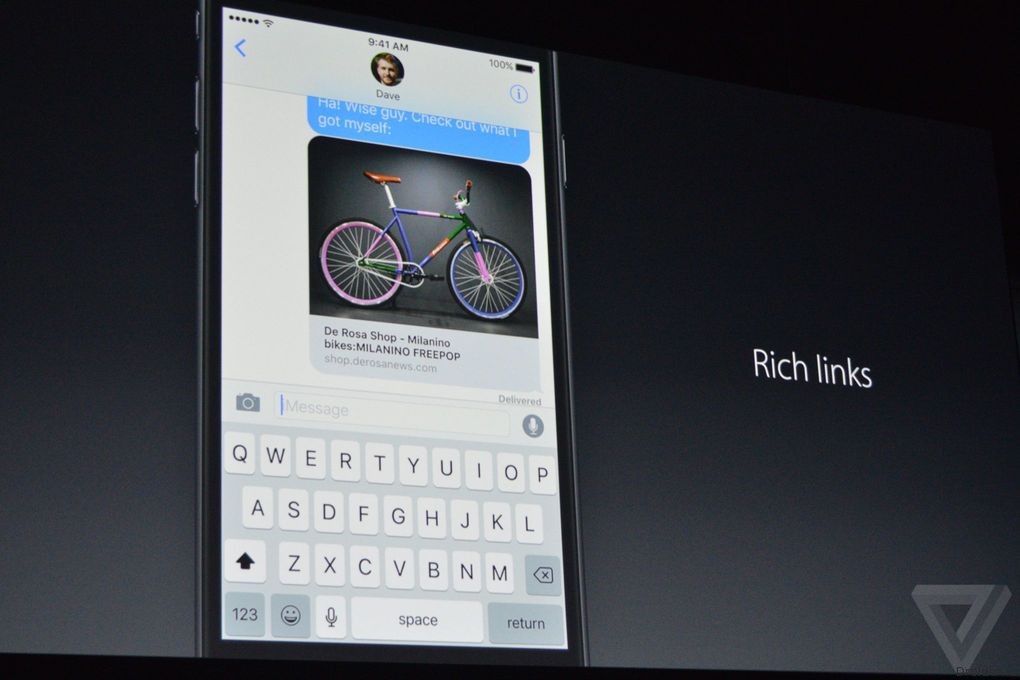 10. Restarting iMessage: a reference parser, you can do the dialogue, gifs have increased in 3 times, some of the words in the message are prompted to replace the emoticons, instead of a message you can send a response (“cool”, “like”, “Yes” or “no”), the heartbeat (if the Apple Watch), hidden message (to display the text, you need to RUB the screen) or send your handwriting (a feature called Digital Touch). Inside iMessage created an application store where you can buy stickers, themes or to call a taxi.

“we managed to disfigure only Messages, but also to the rest of us get” pic.twitter.com/CxnDWz4ERD

In addition, Apple has launched an app for Home control "smart" things. Now to turn off or turn on the light in the kitchen can be as fast as to start the flashlight on the iPhone. 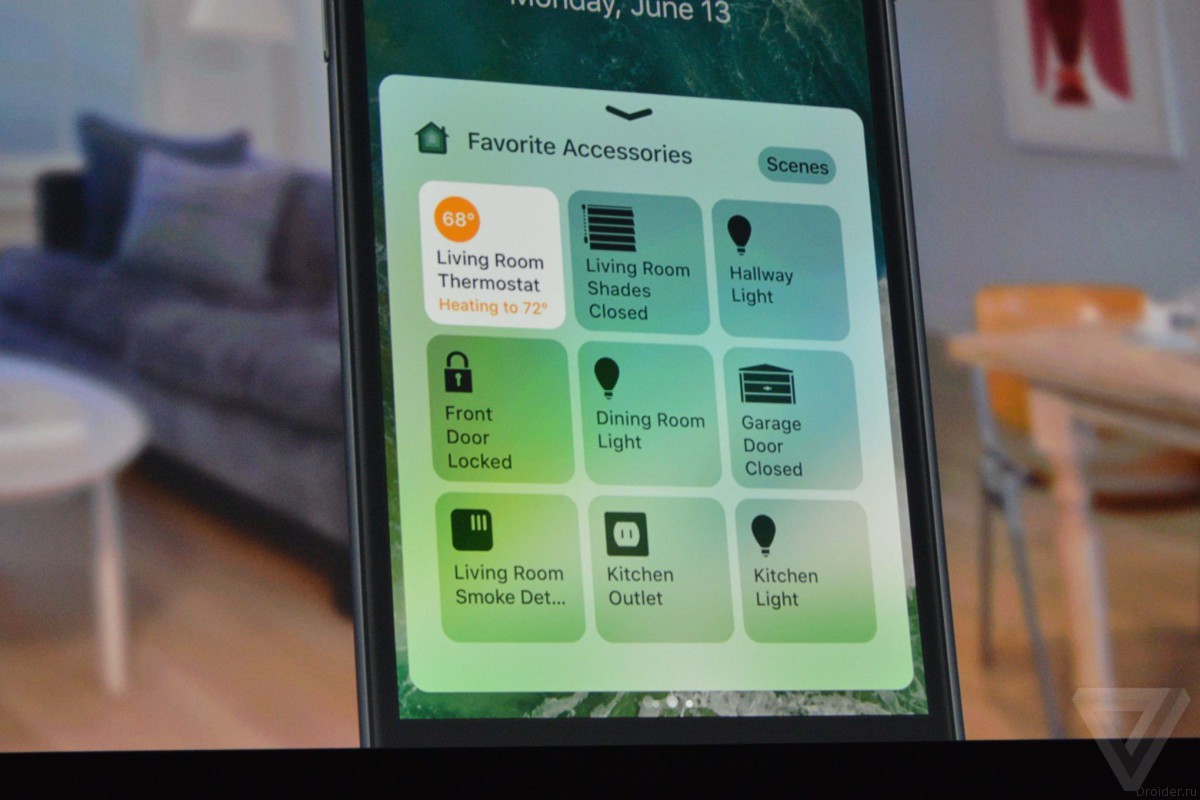 After the presentation of TechCrunch reporters obnarujilithat standard apps in iOS (“Mail”, “Podcasts” and “Notes”) appeared in the App Store. Does this mean that the stock programs in iOS 10, it will be possible to get rid of?

In the third version of the operating system for the Apple Watch, the main emphasis was made on applications for sports. The developers have added a new dial, which will display information on the current goals and results. The owners of “Apple” smart watch will be able to compete with each other and to be measured by calories burned. 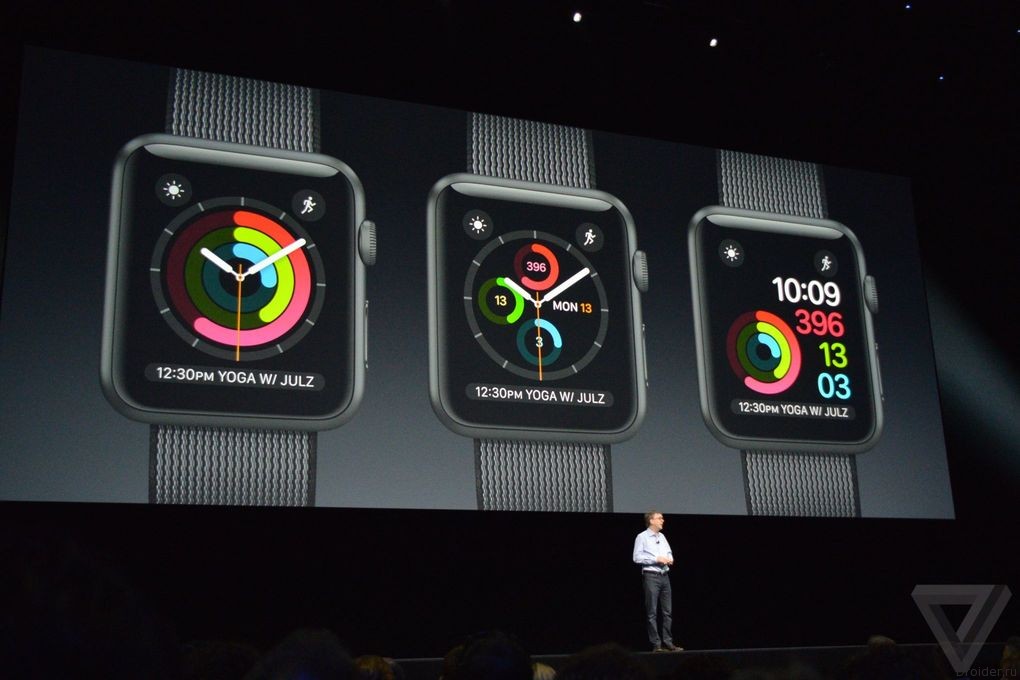 Important update was the quick response to incoming messages. Now the answer can not only dictate, but also to write by hand directly on the screen of the Apple Watch.

In emergency cases, the clock will be in contact with rescuers. To do this, the user simply hold down the power button hours the rest of the gadget will do it myself. 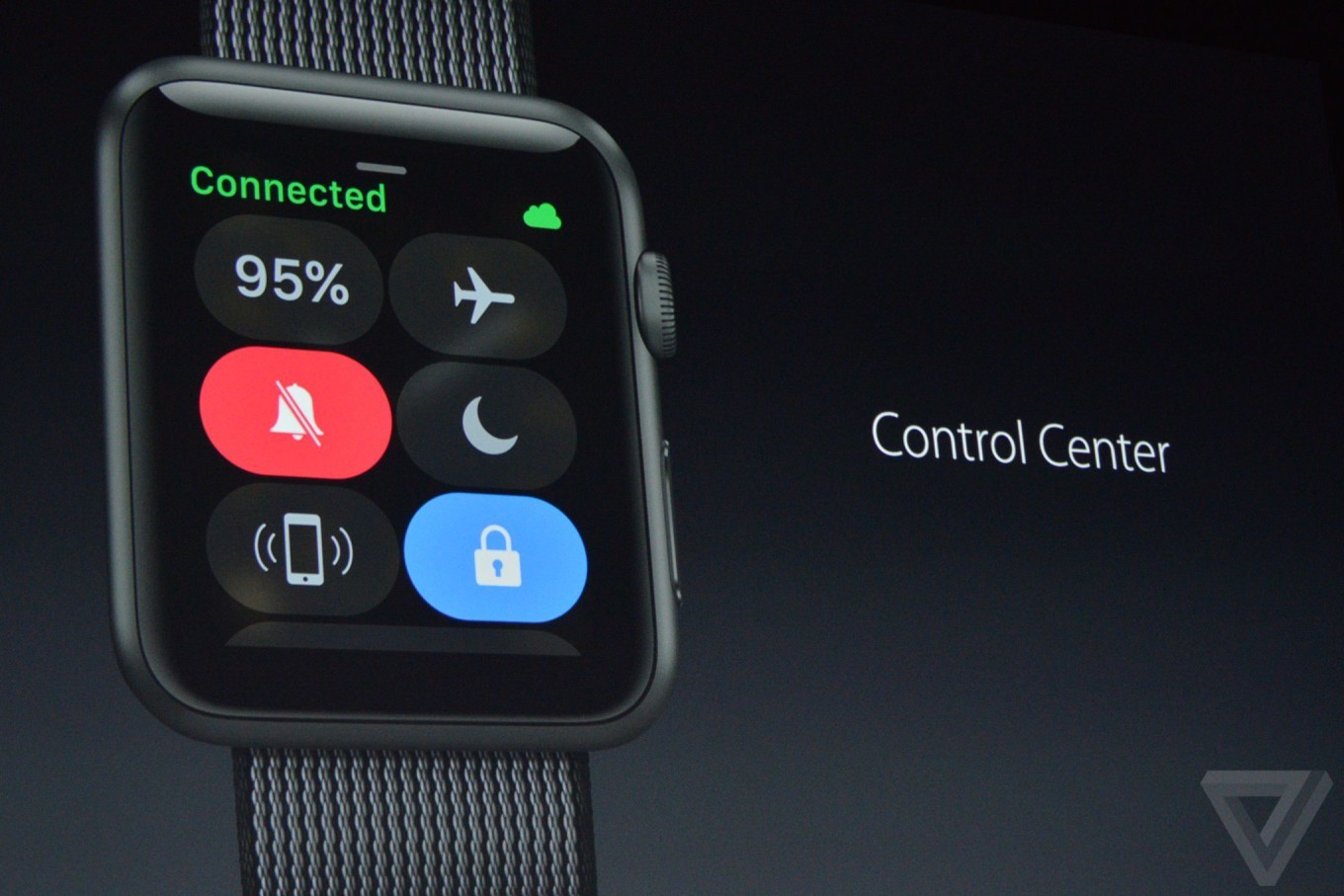 The new watch OS has a command center and multi-tasking. Even Apple have done a good job on a faster run applications.

The Version for developers became available immediately after the conference. For everyone else, the update will arrive in the fall. “If you get a new watch,” said from the stage.

With a new tvOS users of Apple TV will be one headache less. Cupertinos finally added a single login for all services that are connected to the console. Enter the password with the remote several times no longer necessary.

To Control the console will be using the iPhone. In addition, the smartphone can be used as a “pointer” to draw on the TV screen. 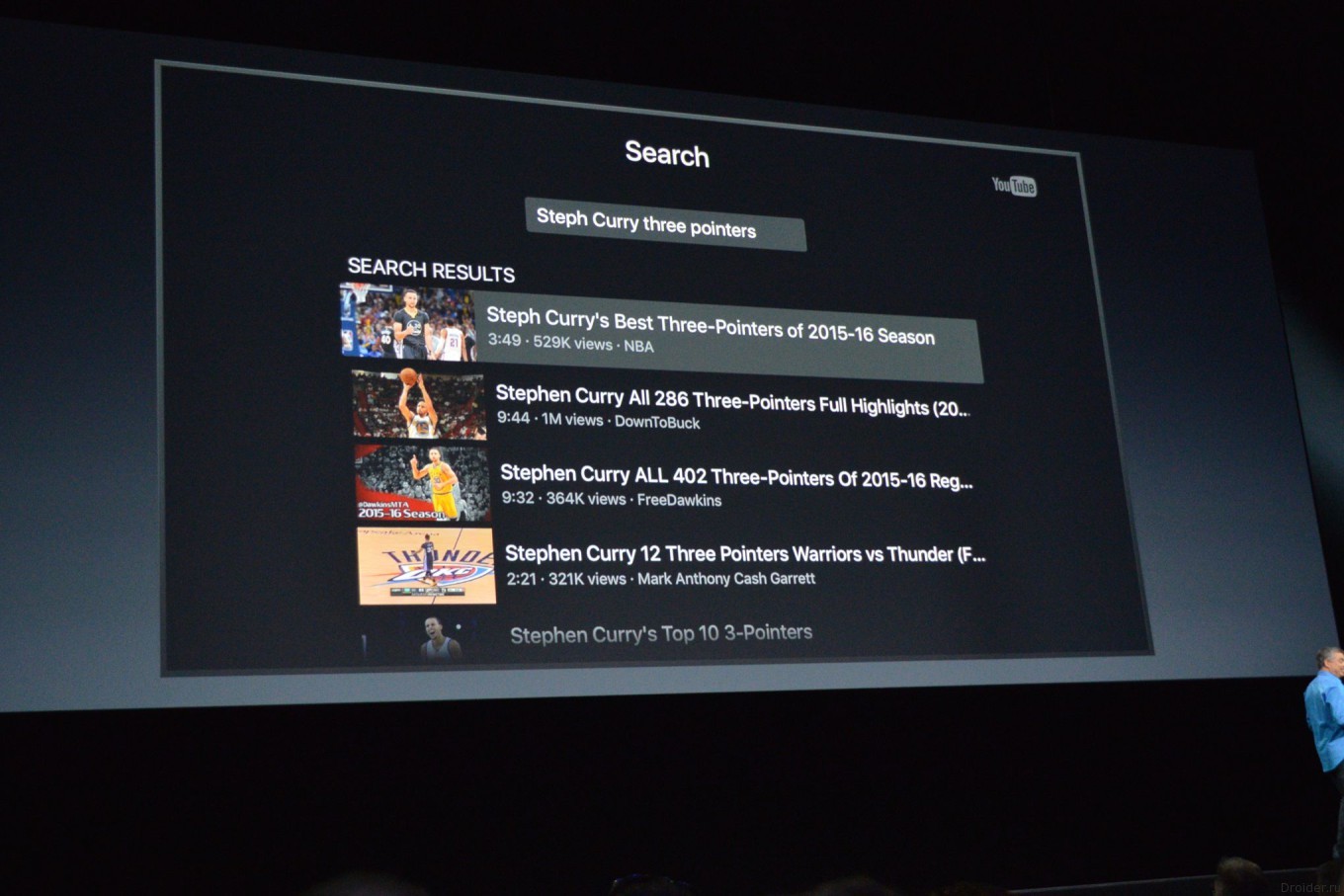 There was a dark theme for the interface (which also updated), and Siri has learned to look for videos in YouTube.

For developers, Apple added in tvOS set of tools for creating third-party apps and games. 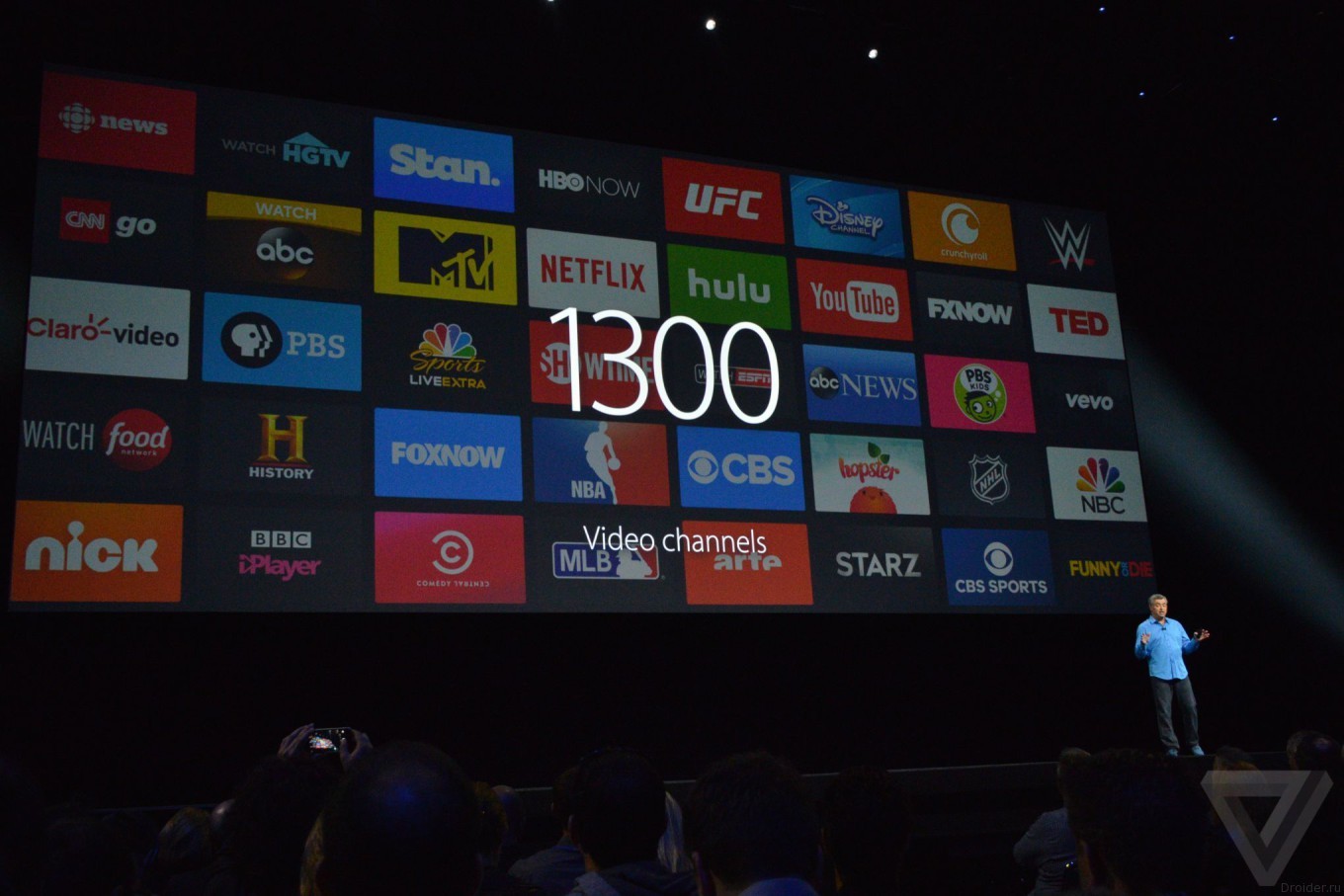 A Beta version for developers is already available, and others will have to patiently await the arrival of autumn.

Now the name of the operating system for desktop computers was given to the General pattern. While OS X, macOS, Hey! The new version, which will be released in the fall, will be named Sierra (in honor of the mountain chain of the Sierra Nevada). 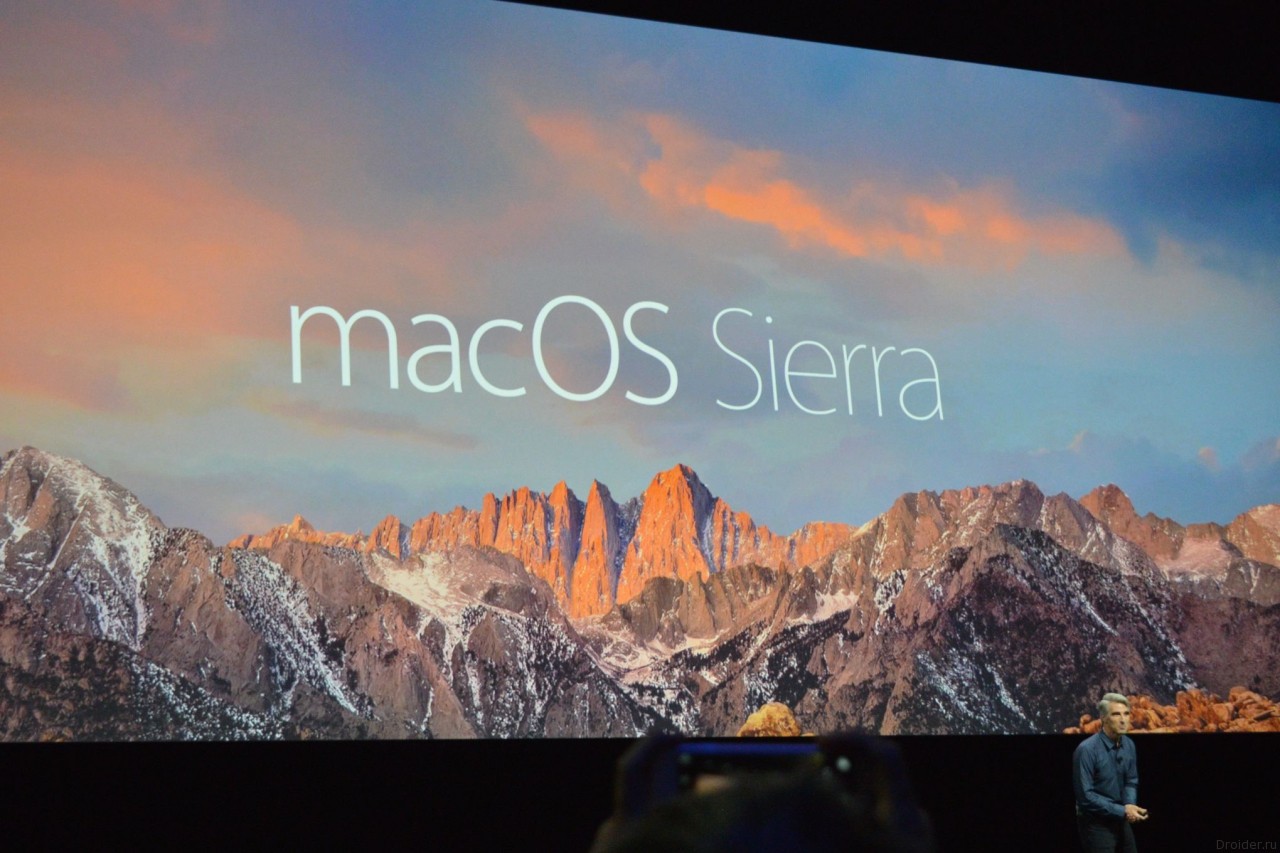 The Main innovation will be the integration of Siri. Voice assistant will be able to search for files, launch applications, play music, create reminders, and perform many other functions. It is strange that the company took 5 years to migrate to the iOS.

With the arrival of Sierra, the owners of “Apple” PC will get rid of the need to constantly enter a password to unlock the device. However, this will only work if the wrist of the user flaunt the Apple Watch. 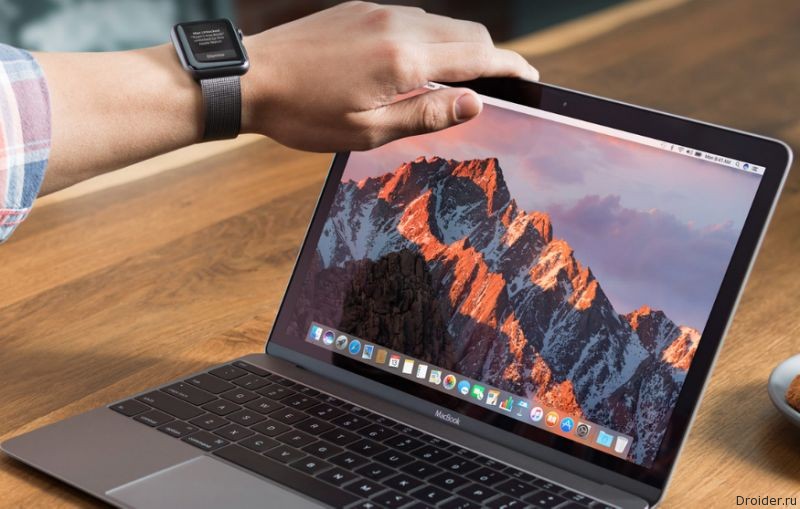 Important innovation was a single clipboard macOS and iOS. That is, the user may copy text typed on the iPhone, to paste it on a Mac and Vice versa.

In addition, Sierra has a desktop synchronization. Files with Mac will be available on other computers and any other Apple device, whether iPhone or iPad. Do not forget about a mode “picture in Picture”.

Good news for fans of torrents. iCloud Drive learn to automatically free up hard disk space by moving unused files to the cloud. According to the developers, the newly created feature will help to release up to 150 GB of disk space. 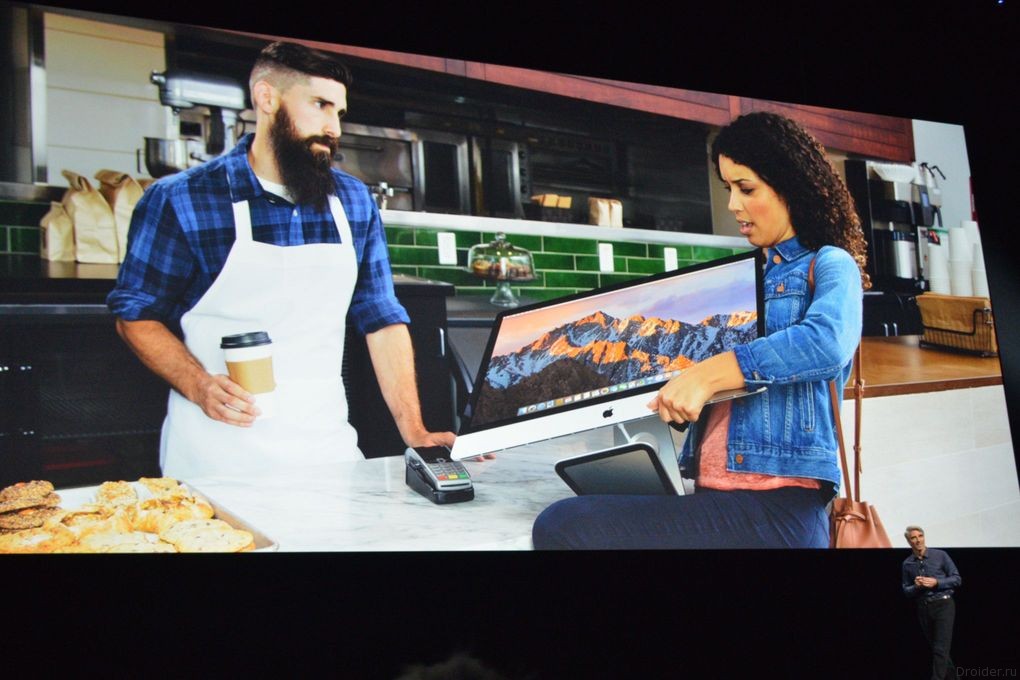 On macOS, you can make purchases using Apple Pay. Yes, in Russia it is useless, but it is convenient, because there is no more need to carry around an iMac!

The open beta test of the new macOS will begin in July (the version for developers appeared immediately after the presentation). For all other Sierra will be available in September and will be supported by computers 2009 release.

Before the main part of the conference, Tim cook announced a minute of silence the lost to Orlando. It would seem that such things in IT presentations the place, but the head of Apple takes a different position. 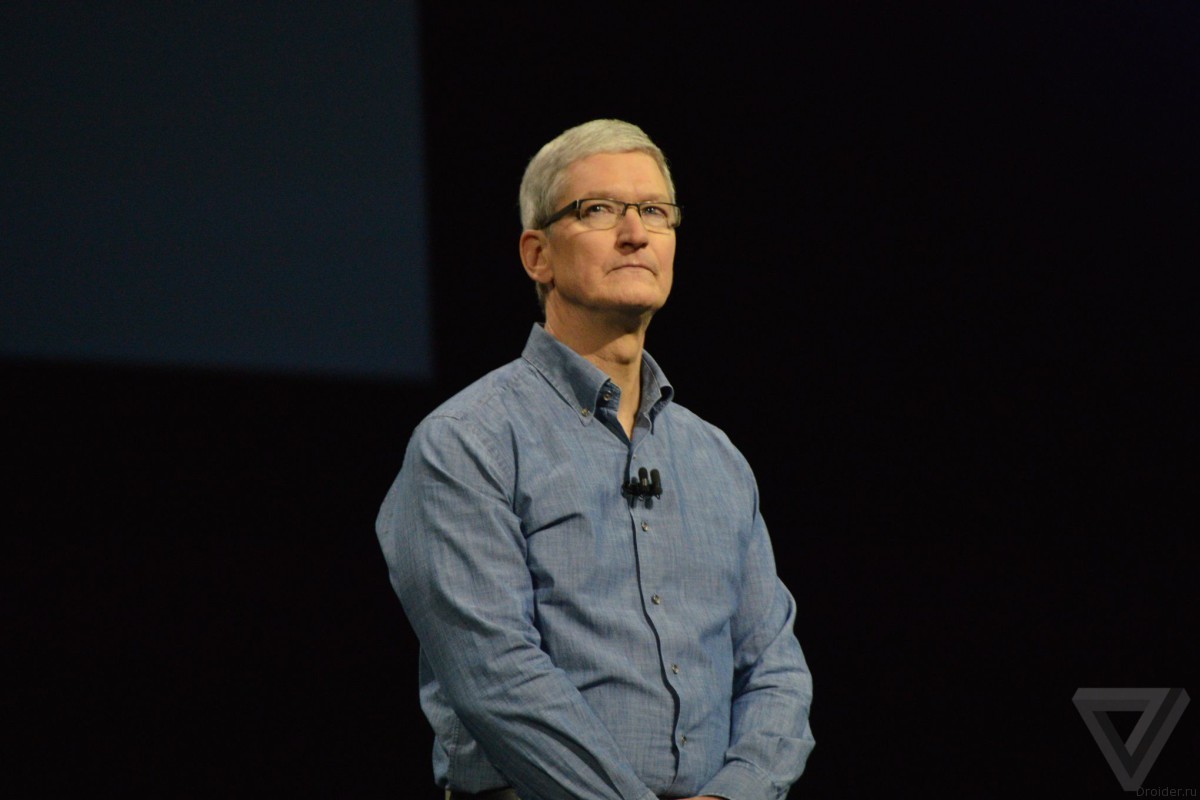 “Before we start the presentation we would like to dedicate a moment to the words about the tragedy that occurred yesterday in Orlando. Our deepest condolences to all who were affected by this senseless, unconscionable act of terrorism and hatred.

The Apple Community consists of people all over the world. It will make us all stronger,” said from the stage Tim cook.

According to Walt Mossberg, columnist for The Verge, after the speech, cook has never been so quiet.

The Conference has become one of the most memorable and interesting. Now Apple has taken an important step forward for users and developers. The latter even got a free app Swift Playgrounds with which to learn programming will be able to even for 9-year-old girl, which Tim cook began the main part of the conference.

Apple has demonstrated again that kind to the little things that others close their eyes. Remember changes in watchOS, which was made specifically for people with disabilities, or about the accessibility of the iPhone. The cupertinos important every user, regardless of physical condition. 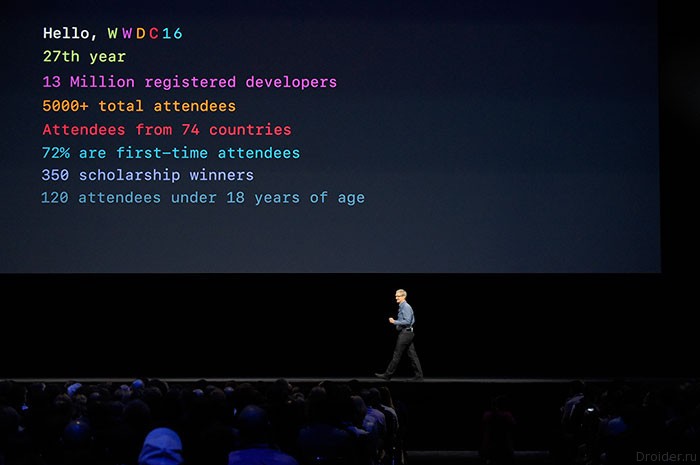 Valentin Petukhov during the broadcast repeatedly emphasized that Apple does not hesitate to repeat the competitors. Maybe that's like trying to jump on the bandwagon (as is the case with the integration of Siri in macOS), but until the Corporation is forgivable.

For the quality of the screenshots thanks edition The Verge